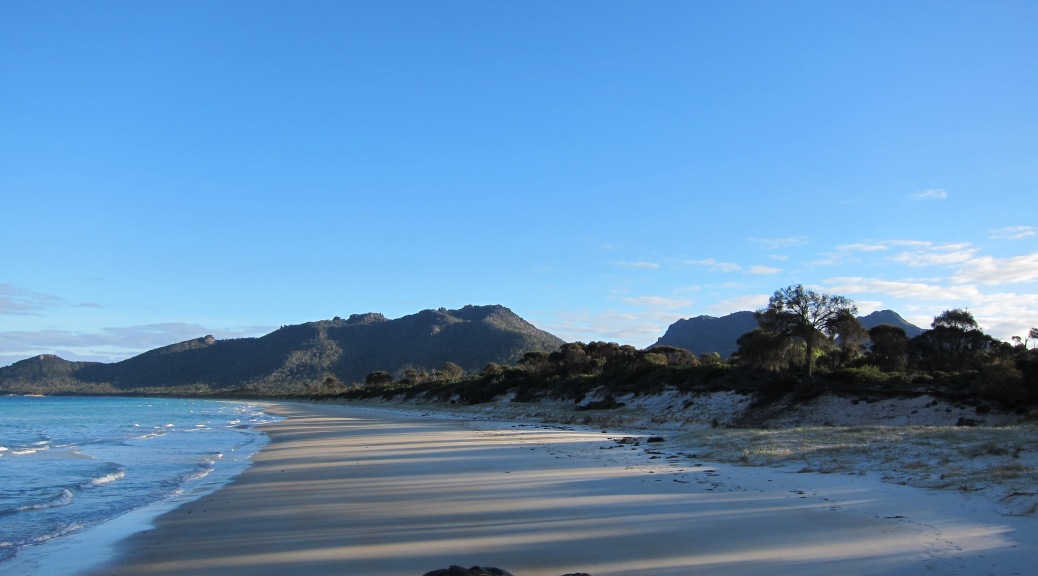 Test of the toughest

It got underway badly. We were well prepared and packed all ready to walk leisurely up to the lookout and then down to camp at Wineglass Bay with plenty of time after the morning’s drive.

“No. You have to do the circuit walk anticlockwise”. Visitor Center ranger guy. Ugh! Rules and regulations in National Parks that were different to the “Great Walks of Australia” book were annoying. Now we had to throw all our last minute gear together and dash off to give ourselves a chance at completing the extra 9 km to the recommended campsite. Only being a 3 day hike Cath had cooked a yummy chicken dinner that was left in the car. I raced back a few km and retrieved it then raced back to catch her up. Weather conditions were perfect and views were great but we were still agitated about the longer distance and changing well laid plans. 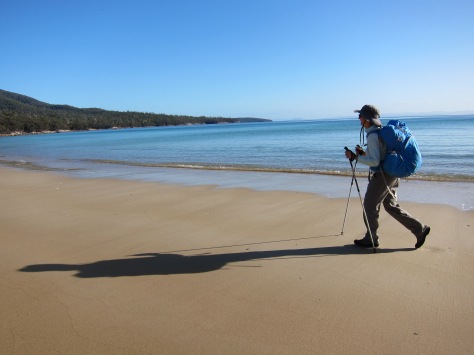 We eventually made Hazards Beach and a subsidiary campsite at its southern end. Cath was tired. There was ample water. The site was fabulous. We stopped early adding thereby a few extra km to the already long day’s walk the next day. Our good feelings resurfaced in the sunset over a glassy sea sitting on stunning orange and pink granite boulders. The cameras went wild. 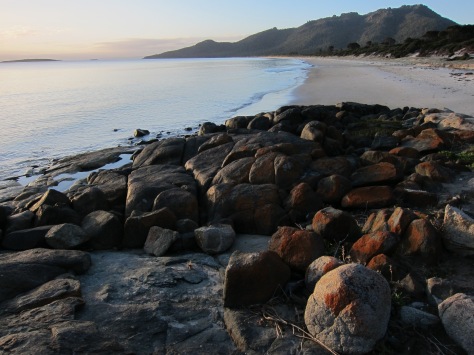 Later Cath got the clever camper award by putting all our food in a big dry bag to seal in the smells and then tying this up in a back pack. Her master stroke to prevent possum extraction was to coat the pack rain cover with aeroguard to confuse and scare away their snouts. Before bed I fashioned a walloping stick just in case. In the middle of the night we came under attack so I yelled and bashed the backpack outside leaning against the tent. Unzipping the door I thrashed the ground with the stick. Then I heard rustling on Cath’s side, ripped her door open and brandished the club wildly. Then I heard it in her sleeping bag! She was wide awake by now and shouted at me not to strike. The rustling was her knee changing position on the blown up silver wine skin she was using for a pillow. Close call.

Now Cath is a very keen walker. She has been training hard for an upcoming extended hike on the Larapinta Trail in central Australia in July. These walks in Tassie were to be a lead up. About five years ago she had a resurfaced right hip (pretty much a hip replacement) and then three years ago an upper tibial osteotomy on her left knee. Both for osteoarthritis. She also spends many hours each week walking in the pool and doing physio exercises. The climb up and down from Pine Valley Hut to the Labyrinth had caused grief to her knee so she was not in her best shape at this moment in time and had been very tired reaching the “early” camp.

I am a recently retired outdoor education teacher and have had a different sort of knee arthritis issue that recently has seemed to resolve itself. I was back running and training for an upcoming half marathon. So I was in good shape. In my work and in other personal adventure trips I am accustomed to carrying big packs and heavy loads. I looked at our current hiking exploits as team affairs where the aim was for us both to enjoy ourselves, achieve our goals and finish in reasonable nick. To this end I carry more stuff and Cath carries enough to make a difference. On a 3 day hike I carry about the same as I would on a 6 day trip which is quite achievable. We’ve worked out our limit is about 4 days. Any more than this or the necessity to carry lots of water and I will start to lose the ability to enjoy myself. I’ve spent 30 years of my professional life assessing people’s capabilities and supporting them to work towards achieving worthwhile adventure outcomes. I have a conservative approach to the mountains. Getting out of depth or overextended is not a place to be in a situation where the weather can change, people get exhausted or injured and rescue or backup may be difficult. On work trips I had got in trouble a couple of times with students injured, exhausted and cold with the weather closing in. Both required rescue. One of these was challenging. Sometimes difficult decisions need to be made with much gentle negotiation to minimise the possibility of sticky situations developing. I thought I had some good skills in this.

Our next day’s walk would be long and we had added another 4 km by camping early.

Canberra Bushwalking Club have an excellent grading and length calculation guide to their hikes. For every 100 m of ascent or descent you add a kilometre to the route length to give an estimate of the effort required and the length of the day.

The estimated route distance of our planned day 2 was about 16 km. When we took into account the 580m climb and descent that added about 11 km of effort making a total of approximately 27 km. The route went over the top of Mt Graham and it didn’t appear that there were any escape routes if things went pear shaped. The weather was forecast to seriously deteriorate later in the evening. I thought we were biting off more than we could chew and suggested we could reverse part of our previous day’s walk and go the easy way to our planned destination, camp and then hike up the mountain without packs as far as we wanted – safe, easy, lots of options. Cath was having none of it. We were up at 7.00 and walking by 8.15. The easy way out just didn’t cut it for her. I didn’t want to see her weepy and in pain. She had determinedly struggled through so much rehab already.

The first part went well. 4 km. Drink. Rest. Turn uphill. Cath’s knee was going well. We were slow and steady and rested regularly. On the steeper sections to the major saddle she placed her feet carefully and followed the mantra for going up and down with dodgy legs – “good go to heaven, bad go to hell”. This puts the effort and weigh on the correct leg to reduce strain on troublesome knees. Her walking poles got a workout. Lunch 1.00 pm. The final 180 m ascent to the summit involved some scrambling up slabs and large steps. Small bushes made good handholds. 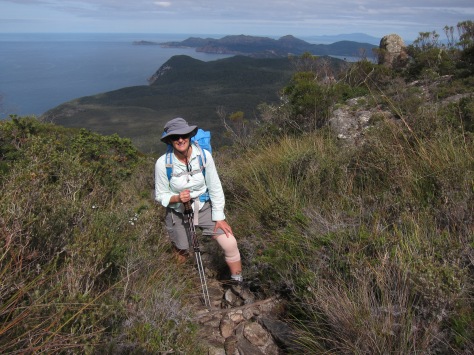 The view 360 degrees on the summit was magnificent. Schouten Island and coastline stretching south. Rugged cliffed coast to the north. In the foreground beautiful Wineglass Bay and the dramatic granite peaks of the Hazards. Inland to the west some weather was building slowly. The sea out east was still, calm, flat, perfect. 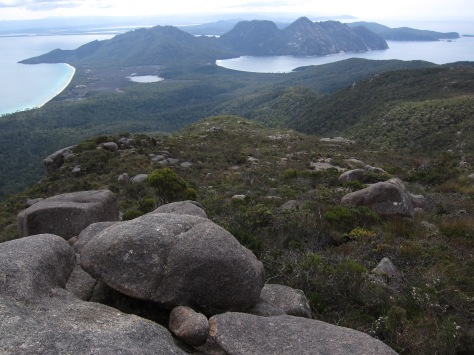 The route down looked long. 3.00pm we departed the top of the mountain. Most mountaineering accidents occur on the way down. Descending was harder for Cath. We slowed but plodded on. I tried to navigate our position accurately on the map but it seemed to take an age to get anywhere. Steep down. Slow. A flat section through button grass fields. More steeps. Another flat. Now she was really tired. I figured we were still only half way down. 4.30pm. The track threaded through cliffs with a few steep drops below narrow foot ledges. Eventually we started the long ridge to the bay still way below. The last few jelly beans. Cath started getting angry. At the track mainly as the steepness and length didn’t match the description she had read. At the terrain. At every small uphill. At the down climbing over boulders. At my navigation which had us about 2 km away for ages. Very weary. I wanted to carry her pack too which she reluctantly agreed to for only a ten minute section. Angry we were still not there yet. I hadn’t seen her negative like this before.

Afterwards she said that she always knew she could make it down. Long distant deep memory of having done things harder in the past gave her this knowledge.

6.15 finally we made it down. Cath was utterly spent. Admiration.

Wineglass Bay lived up to its reputation as one of the ten best beaches on the planet. A sculpture of whalebones stood beautifully on the beach in the sunset. We risked the exposed campsite with the terrific view. Over dinner possums and a Bennets Wallaby attacked our camp unafraid. Bravely I fought them off with a walking pole. The aeroguard trick worked again. About 5.00am rain pelted down, thunder rolled around the bay and lightning rent the air outside our cosy tent. Grimy, sweaty, stinky, warm we breakfasted in bed in hilarious jocularity as the storm blew itself slowly away. 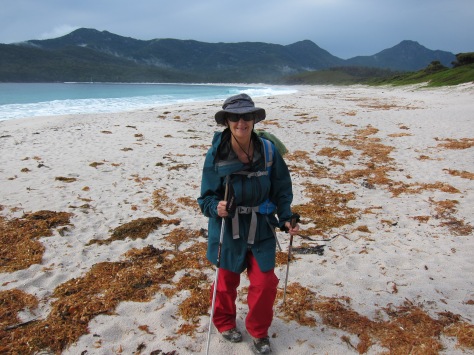 Champagne waves broke perfectly on the sand as we walked along the beach. The sun returned by the time we made the lookout. Water flowed everywhere, down runnels in the steep slabs and the creek in the gully below. 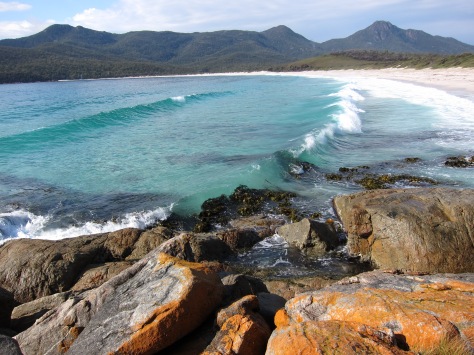 Hot shower. Comfy bed. At the bistro Cath celebrated her winning of the Toughest Camper Award with a champagne dinner. The walk had been a real test and challenge. It was a great confidence booster for the Larapinta. A new benchmark had been set. Nothing could be as hard as “Mount Graham”!