A narrow foot track led us down into a land of deep green, damp, tree ferns, moss, mud, huge  trees. Near the bottom a monster trunk had fallen diagonally across the gully.

This canyon offered “bang for your buck”. Lots of action in a small distance.

Jumps in, balances across logs, swims, scrambles through blockups, walks through wondrous narrows, passings beneath dripping ferns. We kept moving to stay warm, abseiled beside waterfalls into cold swirling water, laughed, marvelled at the grandeur of it all.

At a quiet sojourn Piper asked “How are your 52 adventures going Pete?” “When’s the last day?”

“This is 52. And today’s the last day of the year!” My face was just one big grin. We high fived then continue on.

Admired the stunning beauty, smiled and wowed as midday sunlight beamed down on us between the high walls. We awed at the power in floods, the tangled log jams and massive chockstones above. 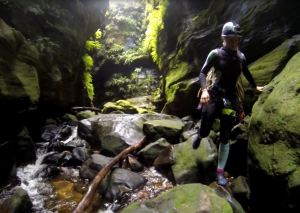 And then we broke out into warm sunshine. A large orange yabbie welcomed us to a sandy lunch spot where we rested before the hike and climb out.

Summers for more than a decade I had dreamed of spending time exploring new canyons in the Blue Mountains.

Hot weather, too hot for other activities. Canyon water is cold. The perfect time of year.

Time now. Invitations to a variety of friends turned into a team of five.

Heavy rain two days before limited our options. Serendipity Canyon has a small catchment and so we could be reasonably confident most of the rain would have passed through.

None of us had done it before. Perfect.

Serendipity means a “fortunate happenstance” or “pleasant surprise”. It was coined by Horace Walpole in 1754. In a letter he wrote to a friend, Walpole explained an unexpected discovery he had made by reference to a Persian fairy tale, The Three Princes of Serendip. The princes, he told his correspondent, were “always making discoveries, by accidents and sagacity, of things which they were not in quest of”. (Wikipedia)

The first abseils went smoothly and took us deeper into the green, narrow chasm. Sandstone walls towered above. We walked downstream, in the water, balanced on logs, over boulders, at our own pace, taking it all in, staying in touch with each other. Sprinkling rain – light and not a bother.

People serendip into our lives.           I’ve been luckier than most.               Kathy descended first down into a twisted gulch beside a waterfall then yelled up that there was a stance below. She was generous, committed, insightful, creative, optimistic and incredibly hard working. She had been crucial to many of the biggest parts of my career – the local Outdoor Ed. Association, professional development, training programs for adults, a national teaching award, post grad research and an unpaid staff person on most of the “Big Trips” – The Reef, The Nullarbor, Point Perp. She’s just a remarkable person. Canyoning. This was our first personal trip together through 20 years of collaborative effort.

The trick is to be awake to the fortunate happenstance. To realise that something special is going on. To take note and appreciate.           Piper scrambled down out of sight then reappeared swimming through the rift way below.             Almost a decade prior she had sat at the back of the classroom. The absolute ideal student – keen as mustard for everything, patient, intelligent, capable, sensitive to those in the team, a born leader. She had aced the course and then uni as well. And been there as a volunteer on more college trips than I could count or remember. Now standing as the ace herself at the front of the class in that very same room, in her very own program. I can only hope she gains as much from it all as I did and has similar occasional happenstances appear in her world from time to time.

The final abseil was a tricky one. Down through a narrow slot. Breon hadn’t done much roping. The rope lowered across his foot as his body descended underneath. His weight pulled it down tighter and then water started falling on his upturned face. He had spent days guiding us round the ski runs in Japan in his own time. Carefully he had inspired and managed the safety of high spirited snowboarders in my college groups as they made jumps in the backcountry snow miles out from the Perisher ski patrol.     He deserved better from me. Somehow as I eased the rope up slightly and Kathy belayed he wiggled his foot loose bit by bit. Then free. Relief. He disconnected from the rope in the deep pool at the bottom and swam to the other end.

We lunched at the intersection with the Wollangambe. A commercial canyoning group came in behind us. Another group floated by on air mattresses. We inflated our lilos and paddled downstream through long pools separated by boulder chokes and logs.

Lying back I could watch the sculptured walls above.

Another canyon, Whungee Wheengee, joined our stream from the left.  We left our gear on a mud bank and explored up into it. The water was much colder. I followed Rachel upstream into the narrowest part of the chasm. The light, the green, the scene, was sublime.           Rachel is a star. Some people just have a knack of lighting up the world. Of making things around them sparkle. Like singing up goodness out of the earth.

Just past the Waterfall of Moss Canyon was our exit beach. Another group and then another with a person with signs of hypothermia. After making sure he was ok we started the long, hot, steep climb out of the gorge. Out of my own Persian fairy tale with a prince and the three princesses of Serendip.