Interlude (not an adventure)

Commonwealth Avenue was long and tedious around the 14 km mark. I ran the white line, weaving through the broken lines as a distraction. Earlier I’d been singing out loud like karaoke where only I could hear the music and only those around me could hear the singing. What the hell. I was loving every step, feeling strong and free. The sun was out. My playlist was a cracker – all my favourite loud running songs. “It’s a beautiful day” sped me up over Kings Avenue Bridge. “Living on a prayer” along the white line. I’d felt like dancing. I couldn’t control the urge to fly, arms out, as the music crescendoed. I almost risked a grapevine dance move at one point early on down past Parliament house when I was running faster than planned and feeling good. Half way through I committed to the faster pace. I was on top of the world. My two best buddies, one in front and the other behind, had stayed the night before and we’d had uproarious good fun. Wives, Cath and Kathy encouraged us from a series of points in the first half that were close to the start. I was flushed with the thrill of running free.

Two years ago I had suddenly been struck with a form of aggressive arthritis. Multiple medications were ramped up from basic to serious cancer drugs to try to tame it. I thought I’d probably not run again. Then very slowly it improved in small increments. Regular blood tests. Very slow reduction in the meds and side effects – mainly fatigue. I eased out of work and started running again tentatively.

Three weeks ago I had been able to stop taking the drugs. One week ago a final blood test showed everything was back to normal. Amazing. It could come back again but for now it was gone. Lucky, lucky me.

“Viva la Vida” carried me along at full volume like it always does.

In these long runs there is always a point where it gets hard, usually about three quarters of the way thru. At this point I saw up ahead a group of my friends and colleagues from college. They waved and cheered. I was overcome with emotion and started the flying routine, then punching the sky. A little further on I realised I’d picked up the pace even more with all the exhilaration. They had picked just the right spot of maximum need for maximum support.

I pushed smiling up to a final turnaround. A little further Roger, a colleague, stood waving, cheering, smiling. I had to stop and give the big bloke a bear hug in thanks. 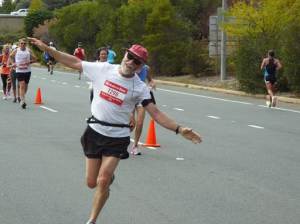 A few kilometres from the end they were waiting for me again. All shouting, waving and gesticulating. The plane arms went out and I wove towards them. Dan waved his cycling yellow jersey. Jess jumped up and down. Colleen madly clicked photos. And everyone else cheered wildly. Joe and Gordo wave me through. High fives all around. If I could have twirled and cartwheeled I would have. What generosity and care. To come down out of their Sunday to give me a burst of support when I would need it most. What makes people do these things for each other? I pondered while I lifted the pace towards the finish. When our goings get tough who comes to our aid? I’d connected in some special way to all these people. Was it that they all knew what struggle and pain and suffering is all about. And that to care and reach out is part of the best of ourselves.

“Sky full of stars” blew me away over the last bridge. “Chariots of fire”, which had been our theme song over dinner the night before, played inside my head as I sprinted to the finish. Spent. Cath and friends, hugs. Gratitude. Sometimes some of us are lucky enough to be able to regain the wealth that is our health and wellbeing.