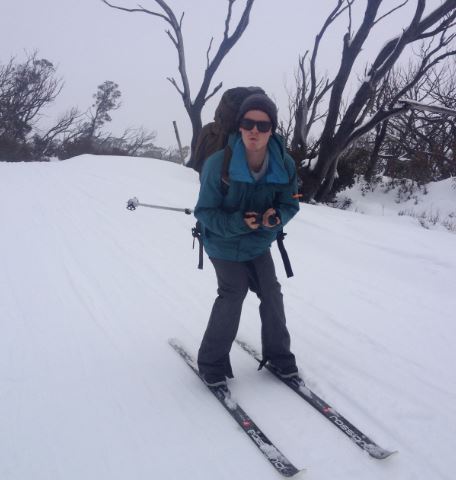 Snow had covered the mountains in the last couple of days. Branches hung heavily laden with white ice cream. The roadside was a snow bank from a recent snowplough. Many of the students had never seen snow before. It was like the classic photos and films from northern hemisphere white Christmases or Hokkaido in deep winter except the pine trees here were eucalypts, snowgums. We had a hassle with the tyre chains before driving higher into heavy snowfall. Excitement rocked the bus as the group booted up and sorted out their gear for the day.

Mitch then walked them through deep powder a short distance from the Perisher carpark up to the Nordic Shelter. He had been a student himself on trips here 6 years before, in the same year 11 and 12 outdoor education program. As a student he’d been into everything – snowboarding in Japan, diving and snorkelling at the Reef, canyoning, surfing up the coast. Camping and coast activities with his family laid some initial skills and interest but he became hooked in totally in the college program, like some of the students he was working with now as their teacher, guide and mentor. On the flat we covered the intro skills – using the skis, walking on the flat, star turns, gliding. Falling was fun but recovery practice difficult in the deep, soft snow. Shelter then in the warm hut with a cuppa.

At the front of the group Mitch set a slow pace along a flat groomed ski trail while I brought up the rear. The year after graduating from college Mitch worked pretty much full time as a barista/waiter. Threaded through this “gap year” he was able to complete a full Certificate III in Outdoor Recreation as part of a program of the college and the local university. He learned quickly about the difference between being a student and a staff person and about leadership while picking up his caving guide qualification on an expedition to the Nullarbor Plain. His snorkel guide qual was finished off on a second trip to the Reef. Canoe and kayak guide tickets were done on the Clyde River closer to home. He went on nearly every trip that year with the college as a trainee staff person becoming skilled in a very wide range of activities, landscapes, staff and students. Through all this he managed to save enough money to spend 3 ½ months travelling to Europe both solo and with friends, moving into Eastern Europe as the money ran low. At a flat rest spot we all threw the lightest, fluffiest snowballs at each other and made snow angels. Then back to the hut for a late lunch and a break from the still falling snow.

The afternoon was spent practising skills and funning round the 2 ½ km trail. Downhill skills are harder but most students were snowploughing away merrily by the end of the day. Mitch worked with a couple who were taking longer to pick it up. He had a knack of separating out the components of each skill so they could slowly build – probably a result of his work in high school as a tennis coach. The students had a terrific day. There was hardly an envious glance over to the crowded lifted downhill slopes and busyness on the other side of the valley. Even Mitch, an absolutely passionate snowboarder, had been able to leave his interest in the “other” skiing behind and model a genuine love of cross country skiing that was transferred straight to the group.

Overnight the weather had settled and cleared a little. After a freshen up of skills from the previous day we started on more advanced uphill techniques – herringbone climbing, side stepping, zig-zaging and downhill – linking snowplough turns and christries. Some students picked things up really fast. This is one of the pleasures of teaching Nordic skiing. Morning tea, then we set off around the longer 5km trail. Over the ridge we lost sight and sound of the resort and felt like we were in the backcountry. Mitch led the way and managed the group. This was his first teaching job, acquired even before he had quite finished his degree, headhunted. He had done 3 years at Canberra Uni doing PDHPE and Technology teaching, also picking up some more quals to add to his Cert III – top rope climbing guide, vertical caving guide, surfing guide. Canberra Uni runs a three semester program. In the optional winter terms Mitch relocated to the snow where he could shred the slopes during the day and work in hospitality in the evening. I can only imagine the fun that would have been living in a group house with his mates in Jindabyne with piles of other mates taking up floor space on the weekends. When uni finished each Xmas he worked full time as a gardener for the three month break. He also managed to fit in a semester exchange to Colorado where he studied outdoor adventure programming, fitness promotion, tennis, swimming and group fitness. He made lifelong friends from every continent and on weekends and short holidays like Halloween he went hiking and snowboarding in the Rockies at places like Vail and Breckenridge. Before his exchange time in Colorado he surfed the west coast in a van with a mate, like in a scene from “California Dreaming”, and travelled Europe for 6 weeks before that. Returning from exchange he had his final semester to complete at uni back in Canberra. We reached a good play spot with a good downhill slope and a marvellous view over snowy hills and the Monaro Plains to the east. The energetic skied up and down while the others rested. The snow had got heavier and harder to turn in off the groomed trail. The way home to the hut took longer as the track undulated. Mitch showed his own drive to improve in practising his telemark and Christie turns on the downhills, unconsciously setting a wonderful example to his students, striving for enjoyment and achievement.

The plan for Day 3 was to do a full day trip up to Porcupine Rocks which commanded a view over the Main Range and to distant horizons in 360 degrees. The weather had closed in again and threatened to be very bad in the afternoon so we opted for a longer trail lower down. Again Mitch led the group out and then onto the 7.5km trail. This led into pristine elevated plateau country away from civilisation. This untouched quiet landscape was as far as you could get from the crowded urbanisation of Shanghai where Mitch was able, 3 months prior, to do a Professional Teaching Placement. He had gained a scholarship from Cricket ACT who supplied 20kg of cricket gear which he took to Shanghai and then taught the sport as part of his prac. Of course he followed this with 2 weeks of personal travel in rural China where there was no written or spoken English. Along the trail we caught a glimpse of Kosciuszko and Porcupine Rocks in a break in the clouds. The students skied confidently up and down the steeper parts of the trail. Mitch recorded a formal assessment of their skills. He had also just completed his own assessment for a cross country ski guide qualification.

There was a feeling of comfortable, warm satisfaction on the bus on the way home. The diverse group had gelled well under Mitch’s care. He completed their overall assessments while they chatted or snoozed. As I drove I overheard two students in the seat behind talking to Mitch about his life and one marvelled at “how he is so young and has already done so much and already has such a good job”. With his characteristic twinkle and disarming smile he had opened himself up to them and given an insight into how a life could be lived to the full. He knew he’d been fortunate and learned from his family about having goals and working hard and saving but nothing that the two students wouldn’t be able to do themselves. I couldn’t help thinking that if my own children were their age how much they could learn from this young man and benefit from spending time in his company in the outdoors.

In the weeks that followed Mitch relayed how the students had thrilled and raved about the trip to their class peers. He thought that the cross country had been a better experience for the students with better outcomes than the more popular snowboarding trips. For Mitch, this first major trip where he was the leading teacher, had been a reconnection back to the college and the program and the actual classroom where he had been a student and was now the teacher. He also mentioned that he is now learning Spanish with a view to travelling to South America at some stage to do a language school in Peru or Chile (somewhere close to one of the classic surf breaks). The world is an amazing place with incredible opportunities.