In other cultures it’s common for people to hike up mountains at special times, to see the sunrise or just to mark the day. Maybe we don’t do this so much in Australia as we do not have any big mountains. Mount Gingera is a special place. It is a peak that rises above much of the surrounding country. The trek in takes some time and effort. Most of all it feels remote. There is a strong sense of wildness with civilisation just a small smudge on the horizon.

On New Years Eve My wife and daughter and I walked the 8 km to the mountain after a two hour drive from town. The day was hot so we started walking in the late afternoon after a quick bite of dinner at the trail head. As we neared the summit in the dusk we heard a low thrumming sound like a lorry labouring up a long hill or a far off jet. The noise slowly grew louder. On reaching the rocks at the top we were surrounded by thousands of bogong moths. They were in a frenzy of movement with no pattern to their flight. I had seen lots of bogongs before but never like this. They usually aestivate in the hot summer months which is a bit like hibernating. They find the cool cracks and dark inner recesses between granite boulders where they attach themselves to the rocks in blankets. They slow down their body processes and the breezes cool them. After summer they fly back to their normal abodes in the western plains. To see them like this was astounding. They didn’t seem to be flying out on mass as if they were exiting the high country. On my camera the flash went off automatically and captured them in dramatic detail. Against the backdrop of golden sky over distant Jagungal and Tantangara they swarmed.

We tore ourselves away to search for a campsite nearby. Heavy footfalls sounded in the snowgums on a shelf below. A ghost white brumby and a brown sensed our presence and disappeared back into the growing gloom. After laying out the tent and a few bits of camp gear I explored the rock slabs for a view of the whole night scape. Two large eyes flashed in the torchlight then slunk away. The whole place seemed to be alive in this short period as the dark descended. Our intent to start the new year with the natural world at the forefront of our lives was richly rewarded with these surprises. The 9.00pm fireworks coloured a tiny space in the far distance as we toasted the time and place with a tiny champagne.

Later when it was properly dark the orange street lights of Canberra flickered through the haze like the shimmering embers of a large bushfire far away. This was a reversal of the vista Cath and I had witnessed from Tuggeranong as we watched the afterburn across Namadgi and Mt Tennant of the 2003 fires.

In the morning there were layers of moths in the cool cracks in the rocks but none flying around.

Postscript. Moth expert Ted Edwards, an honorary fellow with the CSIRO Australian National Insect Collection, says that “it is usual for a proportion of the bogongs to fly at and after dusk at least on a warm night. We know almost nothing about this behaviour, including whether the moths are off to feed, whether they are seeking more secure hiding places and what proportion of moths are involved.” 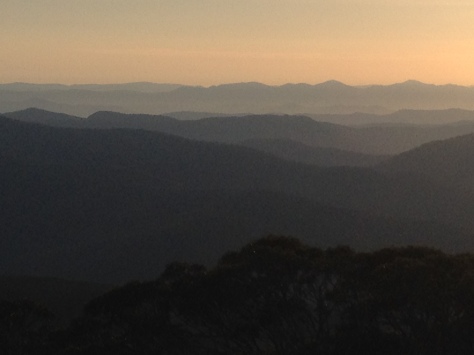