Two adventure motorcyclists pulled in as I filled the tank. The place was familiar from a previous trip into the desert several years before. The town looked the same. But it wasn’t. The last train loaded with thousands of tons of coal had left a month ago. Now the houses were mostly empty. Ghostly. First a large scale mechanisation of the mine had cut the population to a third. Now only one in ten houses had a car parked outside. We purchased supplies from the shop and got some cash from the Tavern. As school finished three busloads of kids were ferried back to properties and settlements in the hinterland. A bit later the regional hospital carpark filled up with visitors. Coal wasn’t needed anymore. Wind and solar were higher priority so the Port Augusta coal fired power station was closing down.

Scotty walked up slowly from his camp in a copse of low mallee trees. The door of his old caravan faced the entrance to the park and the office. Stooped. A little hunched. His red dog loped behind. Friendly. Bushman? Time for a yarn. 71. He retired a year or two ago from cattle mustering. 12 hour days on horseback had finally done him in. Now he was volunteer caretaker of the caravan park. Keeping it going until the government decided how to deal with the town. It was a very appealing picture, at least in the cool of “winter” – patches of cool watered grass, gardens well tended, mulch of small rounded river stones that copied the gardens around town, backing onto the desert flatlands against a backdrop of small rounded sheltering hills.

Later I jogged across the beautiful, lush green oval under the watchful empty eyes of the empty sports club. A whole section of suburb had already been returned to bush almost. Emus strutted up empty driveways into scrub. I wondered about the future for the town and its remaining residents. Tourism – the gateway to the outback? Solar energy arrays? Surely refugees would love the peace and safety but a lack of opportunities and the remoteness would probably wear them down. Nuclear waste storage in that monster hole in the ground? Alinta, the mining company, for a long time had a whole town on the payroll. I hoped they were doing some serious repair of the environment and not just making a profitable cut and run, dig it up, ship it out then move on.

“Have a safe trip. Come back sometime.” The twinkle in the eyes of one of our last real drovers hinted at a lifetime of tales.

It’s mostly a wide, smooth dirt road. Through flat gibber, mesa country, green plains, Cooper Creek wetlands. The Tirari Desert sand dunes on the left and Strzelecki on the right then the Sturt Stony Desert. The clay based Track would be shocking in wet conditions. It had only been reopened a few days ago after recent rain and we were racing more forecast showers. Big, big sky. Flat 360 degrees. Huge stations, an occasional fence and a few healthy cattle after the xmas and recent rains. 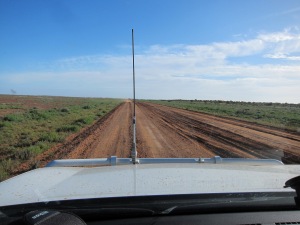 Half way up we reached Mungarannie. Hotel, campsite, fuel, dunnies and a hot spring from a deep bore into the Great Artesian Basin. The bar room was cool. Old akubras from local stockmen h 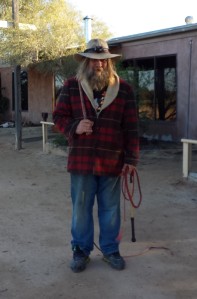 ang from the roof with pony tails. The walls are packed with photos, number plates, drivers licences, bones and other “stuff”. Phil joked about us being greenies then settled in for a friendly chat – the road, the grading team, Warburton Crossing, 9 years, 2 months and 17 days at the pub, now he feels tired. “Here come some idiots” he gestured good humouredly out the window.

Two hikers strolled in from the main road. An older fellow and a young woman, his daughter. They looked pretty fresh but sat away a little to save us from their smell. Little by little their story emerged. And Phil had been expecting them. He had a food parcel stored in his back room that had arrived by post the week before. They were on a walk from Port Augusta to the Gulf – across Australia south to north. The fellow, Steve, had driven up and buried food and water every 30 – 40 km. It had taken them 18 days on the Marree road and Birdsville Track to reach Mungerannie. About 34km per day. They would get up at 4.00am to get in a couple of hours walking before the sun hit. 10km. Rest. 10 km. Rest. Then 5km rests. Jess, the daughter, was a “professional” hiker – she worked at Timbertops and other guiding ventures. With a sunny smile and friendly disposition she casually let slip that next year she plans to walk from her home in Melbourne to visit her sister at the other end of the Alpine Walking Track in Canberra. Their trek up Australia is not my cup of tea but I admired their determination and envied their time devoted to feeling the landscape that surely must seep deeply inside them. Day by many day.