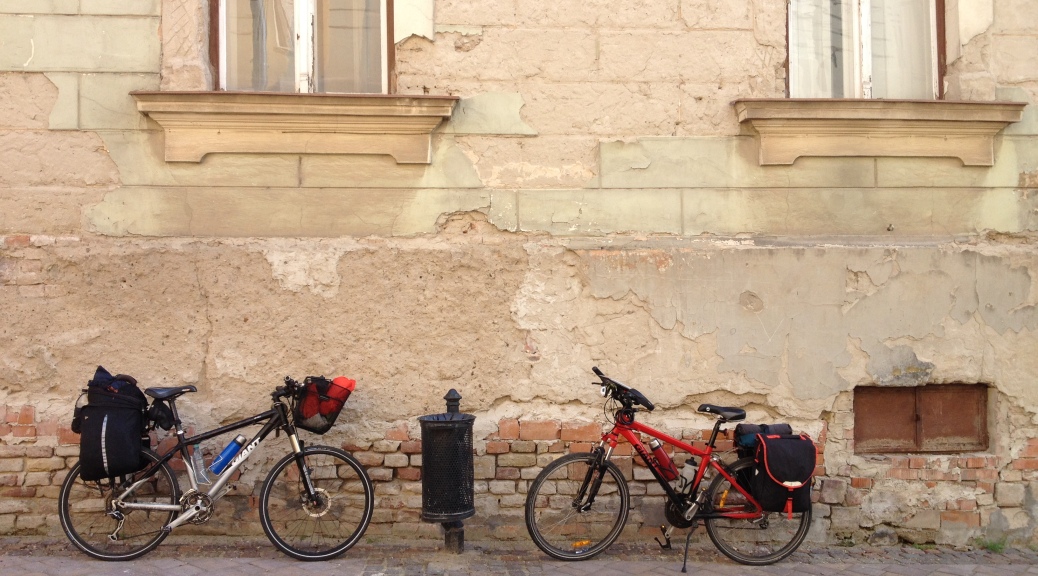 Through the Iron Curtain

After a section through forest the end of the old “Western World” could be picked out by a few hundred meters of road sided by some old, unused buildings – no man’s land. There were no border controls at all, just a small police car, a 24hr gambling place on the Hungary side and an old derelict building sprouting grass. I wondered what it was like living under communist rule. A little further on was an outdoor border museum with trenches, gun placements, concrete sheds and antitank constructions next to a line of barren land.

The Old Town was not that well preserved but was thronging with tourists.

Police were everywhere in the ritzy part of town for a meeting of the EU on security.

The river current was pumping.

During the day we bumped into the NZ couple again.

Our booked accommodation on web turned out to be a horse riding club on the very outskirts of a small town, with brand new facilities next to a sheep shed with a thatched roof.

It turned out that Hungary has quite a strong economy – manufacturing electronics and cars and agriculture. The well to do would come out to the horse klub for weekends of riding and training.

A short day was necessary to juggle accommodation on the route. Some sections have no accommodation so we had to do either longer or shorter days.

Thermal pools provided delicious soothing to muscles that had been working. Trying to work out the etiquette of where to change and how to operate the security arrangements with extremely grumpy staff was not easy or intuitive.

Further east we cycled beside the massive Audi factory, the biggest engine factory in Europe. A train nearby was packed with hundreds of freshly wrapped new cars awaiting delivery. A section of busy roads was full of scary fast cars and big trucks.

At the edge of a small town we headed into several kilometers of muddy, dirt roads that twisted through thick forest. Later a deer was spooked which leapt out of the scrub at the side of the track, heavily antlered, then galloped across corn stubble to leap over grass and disappear.

Kumaron seemed very East European – drab blocks of flats, poor houses and a bit run down but with a large new factory.

Our small hotel oozed with old communist world charm with a reception host straight out of the Adams Family. He was a little overweight, pasty faced with straight slicked hair. He spoke incredibly formal English with a deep Russian accent. We could have been in the heart of Transylvania.

A day in Slovakia 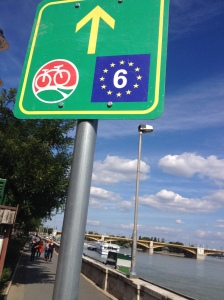 Over the bridge into Slovakia, Komarno was a ship building industrial town.

We followed the riverside dyke with the Danube on the right and green fields and small villages on the left. Often the land was at a lower level to the water in the river that was held in by the dykes. This was tough cycling – no bakeries or coffee shops! – small coop grocery shops and the occasional fruit stall.

A tower in a park gave a fine view of the sweep of the river. By now it was hundreds of meters across. A little further on a long narrow pebble beach stretched round a bend.

We took a deep gravel path for 5.5 km as an alternative to being on a busy road. This was hard going.

A later section had us back on busy roads with trucks. We found these roads nerve wracking. This was why we had not done much cycle touring in Australia. I had once done cpr on a cyclist near Canberra who had been struck by a car and later died. Mostly the route only included the occasional foray onto quiet country roads. 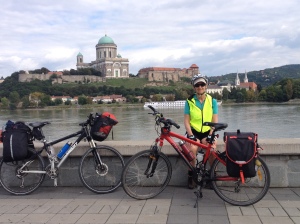 From Sturovo on the river bank we had a wonderful view across the Danube to the Basilica, the castle and the old town of Esztergom.

The bridge that led us back across the river into Hungary had been destroyed in WW2 and had not been rebuilt until 2001 with input money from the EU. The two towns had been separated by the river for 56 years. 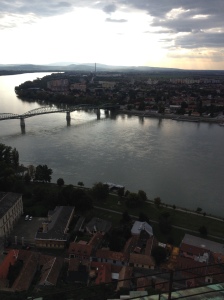 We had a stunning world fusion dinner in a small new restaurant in a very down beat part of town with 4 American cyclists. Ah the treasures of the unexpected in travel!

With the peloton through Slovakia

The day started with Cath bumping into a very old friend who was cruising up the river from Budapest.

On the way to our first ferry across the river we met our America acquaintances again then joined poms, New Zealanders, a Mt Isa crew and a host of others as we waited for 20 minutes for the barge to come over.

On landing we took off in the middle of the peloton heading east. Soon the Mt Isa crew sidetracked while the yanks searched for a WC. We were distracted by the thermos and morning tea in the forest so the peloton dispersed only to meet up and reconfigure from internationals as the day progressed.

Forest trails, busy roads, delightful towns, riverside parks, floodplain meadows. There was great variety around the famous Big Bend in the river. Cycling surfaces alternated from the best to the worst.

Then another ferry back into Hungary. A couple of mean looking motorcyclists looking very wild and Germanic sat astride an old BMW. I asked if they wanted to swap bikes with us to be answered in deep Aussie drawl that they might think about it for the downhills only. I asked where his Triumph was (he wore a Triumph jacket) to which he replied that it was back in the garage at home in Australia. Looks are deceiving. He wished us a good journey with a big grin as he tootled past.

A sleep in and a short day.

We rode slowly to savor our last day on the bikes

Twisting dirt tracks in the forest, rough paved paths, complex linking back roads, beautiful smooth bike paths through deciduous trees past coffee and food stands – accompanied always by the strongly flowing river that had widened to about 250 meters across.

I felt sad to be finishing. The routine of getting up, having breakfast, packing the panniers and spending the rest of each day pedaling through the countryside, villages and towns, mingling with the locals and making friends with other cyclists from around the world had become our world. Simple, journey, ever changing, active, fun.

As we reached the series of bridges across “our” Danube our eyes spread with our grins. At every turn was a magical building in the distance or a stunning scene. The Parliament building like a Disney castle, tall steeples and high domes, turrets and cupolas, coloured mosaic tiled roofs. Budapest is a beautiful city full of liveliness and atmosphere. 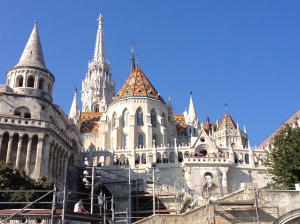 On the famous chain bridge, over the strongest current in the middle of the river we photoed and videoed as it slowly sunk in that that we had finished, made it, reached the conclusion of our journey. We had pedaled across half of Europe, from the western world into the east. 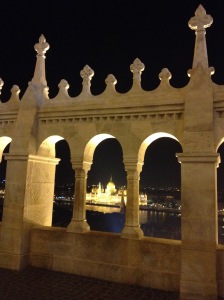 We had immersed ourselves in the lanscapes, cultures and rich histories of the countries. The Danube had guided us on a journey deep into our own personal past and helped us confront our own cultural outlook.

2 thoughts on “Cycling the Danube – Part 3 – Vienna To Budapest”