3 days in the Grindelwald area – in the company of the Eiger, Monch and Jungfrau.

Absolutely 3 of the very best days of hiking in the world.

Above Interlakin is the Grindelwald Valley which is a base for skiing, farming, touristing and climbing. The countryside which makes up the forehills of the high mountains and the winter ski slopes are accessed by a network of small mountain trains. Summer hiking trails criss-cross and thread together into a wonderful network offering numerous possibilities of single day, multi-day and shorter walks. 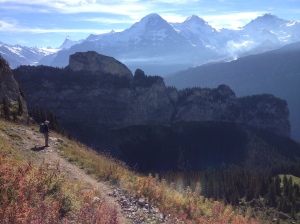 “If there’s a walking heaven this is it”. Cath, after an hour.

“This is the best hiking I have ever done”. Me, after two hours.

The trail started 1500m above the valley floor. The Panoramaweg Trail wound along a wide ridge. Up and over small rises and boulder fields. Alpine grasslands, small conifers, low shrubs. Rounded peaks. Across the deep valley in the south the Eiger, Monch, Jungfrau and a host of other mountains thrust skywards with snow fields and hanging glaciers perched precariously anywhere the cliffs weren’t quite vertical or overhanging. These were our companions throughout the day. Away down below the precipice and plunging forest on the north side of ridge top path Interlaken nestled between two jade green lakes. We crossed steep scree slopes and zigzagged our way steadily upwards. Cow bells rang out on small hanging fields below. 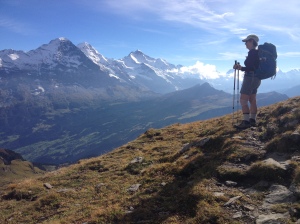 Everywhere the mountain scenery was superlative. We were both overcome with the beauty of it all at various points and a feeling of deep happiness that we were able to experience the landscape, to be in it, to walk through it, to feel it, to wonder at it. Eventually at the peak of the Faulhorn was our mountain hut, a sort of low key hotel really with dormitory style bunks and a restaurant – luxury.

As the sun set on a perfect day wisps of mist rose from the valley at times obscuring and then clearing from the giants of snow and rock and ice across the valley.

Dinner in the highest and oldest mountain hotel in the alps. Dorm beds among the soft night sounds of 20 other hikers.

The half of a day walk took us all day due to the time spent filming and photographing. Accessed by cog railway from Interlarken to Schynige Platte.

Down, down, down. To twin alpine lakes that reflected the high peaks on the opposite side of the valley. Postcard picture perfect. Lunch by a stream. A marmot sat on a perch and squeaked a warning to his mates of a lurking fox in the tussocks below. All nationalities wandered past. Mountain bikers, para gliders lent a playful colour to the backdrop and the sunshine. We grazed on wild blueberries as the trail flattened and sidled across alpine grasslands. All the time the Eiger stood powerful and shaded flanked by grey rock towering peaks that grew even bigger as we approached.

Bus down to Grindelwald at the end of the day

We climbed steeply up the “Eiger Trail” from another cog railway station and along a series of shelves close to the foot of the Nordwand – the famous north face. My climbing passion had been kindled, sustained and fired by stories of early trials and ascents of this fierce wall. It’s one of the three classic north faces of The Alps, the Matterhorn, the Grandes Jorasses and the Eiger. Facing away from the sun they are iced, cold, prone to grim weather and sudden storms. 64 people have died trying to climb the Eiger so far. Terrible tales of tragedies and accounts of “heroic deeds” and climbing narrative hold a revered place in mountaineering literature.

When the track reached its highest point I followed a faint climbers’ path up to the base of the wall. I retraced the steps of Heinrich Harrer, Hinterstroiser, Dougal Haston, Ulli Steck, Toni Kurtz and the cream of the world’s climbers. I stepped slowly, taking time and paying my respects. I reached a snow field that rose to meet the wall at the start of the first ascent route then turning round I found a cairn of stones with some sticks nearby and a few pieces of old climbing gear. Closer inspection revealed the timber to be a broken cross wired together. I fixed it and replaced it into the small rock pile. This day the weather was perfect but still the place felt cold and foreboding. I could make out the original route and even imagine myself onto parts of it lower down. Higher up the hidden snow slopes, the scale of the wall and hanging glaciers were a terrifying prospect. Being with the mountain that I had read about and conjured from the stories for so long gave me a powerful sense of acknowledgement – that it was real, that I was here, that this was a special place for people with a love for the mountains. I didn’t need to climb it or anything even like it but I felt deeply connected to the place and the history and climbing in general. 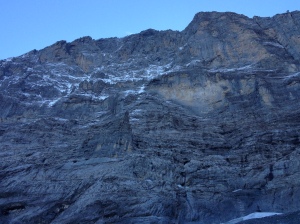 The next day we caught the cog railway train that runs up through the Eiger to the shoulder of the Jungfrau. On the journey down we were accompanied by two young Americans who had just finished climbing a route on the east ridge of the Eiger. They had spent a cold night out on a small ledge the previous night before topping out. They were over the moon about their exploit and we yarned and chattered all the way down.

The next day was cloudy, windy and raining.

I surfed the internet looking for mountaineering boot suppliers in London. Perhaps now life times were right for me to start getting some skills for some trips and easy climbs in the higher mountains of the world. 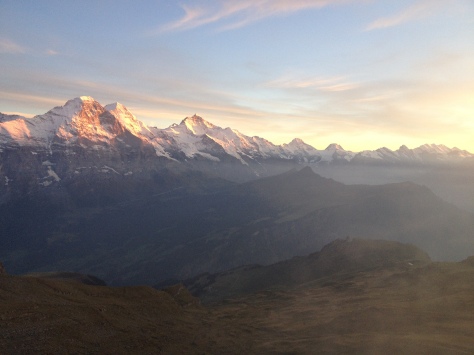 One thought on “Swiss Alps Hike”